Along the magical Dalmatian coast

Enjoy the beauty of the longest cave on the Biševo Island, while swimming in the sea Hop on a bike and explore The Golden Valley, a great resort for nature and wine lovers Ride on a charming wooden boat, that will take you to Ston, for a fantastic gastronomic experience Saddle up on kayaks and enjoy both the attractive shore of Lokrum isle and cave in close
Previous
Next

Dubrovnik Arrival
Transfer from the airport and hotel check-in. Lunch at the hotel.
Sightseeing: Dubrovnik witha a Hint of Game of Thrones Theme
After meal and some rest, start walking tour around Dubrovnik, one of the most significant monuments in the world and one of Europe’s best-preserved walled cities, known since the 7th century. The old town is surrounded by a 2 km long wall that gives a great opportunity to see old Dubrovnik from above during a one hour relaxing walk; the city’s churches, fortifications and monuments are a real must-see.
Dubrovnik has enchanted a lot of famous persons to devote their pieces of art to the city, thus in this city of marble and light coloured stone, you will find numerous art galleries and unique shops. In the historical centre of Dubrovnik, you will visit the main street Stradun, Placa, the main square, see the Rector’s Palace, Sponza Palace, the church of Saint Blaise, the cathedral, the Jesuit church, Orlando’s Column, Big Onofrio’s Fountain, the city port and other hidden gems. While strolling down the streets of the King’s Landing, you will spot many of the familiar places from Game of Thrones, the spectacular show, like St Dominic Street, used frequently as King’s Landing market, Fort St Lovrijenac, Pile Gate, Dubrovnik Old Town’s main entrance which stands next to the fort, and, of course, Stradun, where Cersei’s walk of penance takes place along this Old Town street.
Gastronomy: Cruise Dinner Experience
Later on, embark on a 16th century boat and experience the magnificent sunset. Once the sun disappears in the horizon, enjoy delicious authentic cuisine and champagne in the moonlight above magical Adriatic waves.
Overnight.

Experience: Cycling through Konavle Valley with Wine Tasting and Lunch

The Golden Valley of Dubrovnik, as the locals like to call it, is a great resort for nature and wine lovers. With the lush greenery, abundant wildlife and numerous waterfalls it is a total contrast to Dubrovnik and this is the reason why two of them make such a perfect match. You will be in awe of Dubrovnik’s beauty and energy, and will have an opportunity to relax in this green oasis, not far from the lovely blue of the Adriatic.
Sit on a bike and start exploring this incredible area. Bike along Ljuta River and absorb the serenity of the nature on the way. Pass by the old authentic windmill, Franciscan monastery from the 15th century and numerous vineyards. You will make a stop at one of the wineries and taste various domestic and international sorts of wines, and, of course, the inevitable, authentic Dubrovnik Malvasia. After burning some calories it’s time for a traditional lunch. Visit one of the traditional rural restaurants and enjoy their delicious homemade food.
Activity: Kayak Ride
Later on, meet Dubrovnik from the different perspective – sea level. You saddle up on kayaks, drive along the coast and admire the view of the pink-grey city walls, which stand out against the azure blue water. Be sure that this experience will boost the impression about the mightiness of city walls and will give you a chance to enjoy both the attractive shore of Lokrum isle and cave in close. This beautiful island holds a lot of mysteries and according to the legend it was a shelter to King Richard the Lionheart in the 12th century. Our guide will tell you the whole story once you arrive there. Lokrum Island has been a set for filming the Game of Thrones, and it is another inevitable destination for true lovers of the series.
Gastronomy: Sea-food Dinner
In the evening, you will have dinner at one of the local restaurants and enjoy fresh Croatian sea-food dishes.
Overnight.

Breakfast and check out.
Drive along beautiful Makarska coast with wonderful views over Croatian islands, vineyards and olive groves and stone-made villages, towards Split.
On your way, you will stop at the Old Town of Ston. Stroll down the cobblestone streets and squares around the church of Saint Blaise. The main sight and landmark of the city are the well-known Ston walls that surround the old town and stretch for 7 km. Climb on the walls and experience the amazing view of the incredible landscape.
Dating back to the years of the Roman Empire, Ston was the place where oysters were cultivated, garnering much appreciation in Europe. You will be riding on a charming wooden boat that will take you directly to Ston where you can learn about the long tradition of oyster collection and cultivation. As popular and delicious appetizers, oysters are beautifully paired with a glass of local wine to round up a fantastic gastronomic experience. At the end, enjoy a delicious lunch at one of the best local restaurants.
Experience: Wine Tasting in Pelješac

Drive to Pelješac peninsula, the pearl of Adriatic, settled between Split and Dubrovnik, widely known as the perfect location for growing grapes and making top quality wines. Famed for its excellent vineyards, wine production and autochthonous sort of Mali Plavac, it is an absolute must-see. Visit vinery, meet the winemakers and taste various premium quality wines, accompanied with the snack.
Continue to Split. Hotel check in. In the evening, dinner at one of the restaurants in the historical center of the city.

After early breakfast, pack your sunscreen and hop on a speedboat for the today’s adventure. Your first stop while sailing crystal clear Adriatic waters is Blue Cave, hidden in the Biševo Island, made by seawater eroding limestone. The mix of sunlight and white seabed forms magnificent shades of blue. Explore the cave interior and make memorable photos in this remarkable setting. Your next stop is another cave called Monk Seal Cave. It is named after the most endangered mammal on the planet, Mediterranean Monk seal. Even though there are not any left here, it kept the name. Enjoy the beauty of the longest cave on the Biševo Island, from the boat or water, swimming in the sea.
Not far from here, there is Stiniva Bay, the best European beach in 2016. The long pebbled beach and the vertical cliffs around, create magical landscape for swimming and sunbathing.
Continue your adventure on top of the waves of Adriatic. Before the island of Hvar, explore the archipelago of Pakleni islands (infernal in Croatian), declared protected site thanks to its cultural and historical features. Cristal clear blue water and long spectacular beaches and beautiful lush nature will make you wonder why this area isn’t called heaven instead. Just relax and try to experience your piece of paradise.
Proceed sailing to Hvar. Just after getting on the island, you will lunch at the local restaurant. Afterwards, you will get to meet Hvar, the most popular island destination of Croatia. Town, built in wonderful Venetian architectural style, with traffic free cobbled streets that are filled up with nice restaurants and bars will enchant you during the relaxing walk. You’ll see harbour, Renaissance Cathedral, Benedictine Convent, Franciscan monastery and Church of Our Lady of Mercy. Great final of this tour is a spectacular view from top of Spanjola Fortress, which spreads across the sea toward archipelago Paklinski Islands.
Return to Split.
Experience: Dinner with Croatian Folk Singing Show

Dinner at the local restaurant along with the traditional show: Croatian Folk Singing. Rich cultural heritage of Croatia and Dalmatia, expressed through traditional Klapa, group of singers singing capellas in harmony. Listen to emotional, love songs performed in a unique way, without instrumental support.
Overnight.

Breakfast and check out.
We would like to provide you with the most unique experiences that you can possibly find and one of them surely is an olive tasting experience taking place in a gorgeous garden offering an all around immersive experience combining nature, food and history. Welcome to a family estate that has grown olives, figs, and has produced the finest quality olive oil and wine since the mid 20th century. The sweetest part of this family story is that they have carefully collected traditional desert recipes long safeguarded by families and joyfully make them for the visitors, inspiring a culinary legacy that will continue for many, many years to follow. You will be in awe, once you visit the scenic botanical collection, take a tour of the manufactory where the sweets are handmade, explore the lush Mediterranean garden, and visit the olive oil museum.
Departure
After experiencing new tastes and different countries and local traditions, it’s time for departure. Transfer to the airport. End of services.
Included in Package
Additional Information​
Included in Package
Additional Information​
Included in Package
Additional Information
Does this tour look like your next Incentive trip?
Get in touch!

Other Tours in Croatia 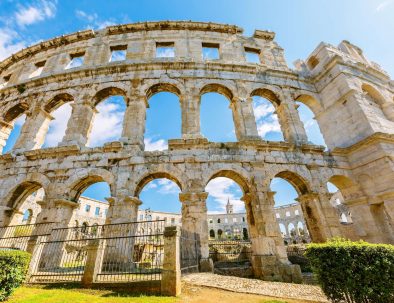 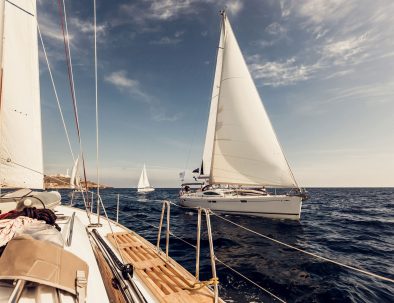 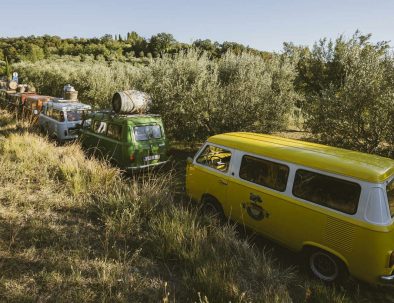 Green Slovenia with a touch of Istria

Read more about the destinations visited 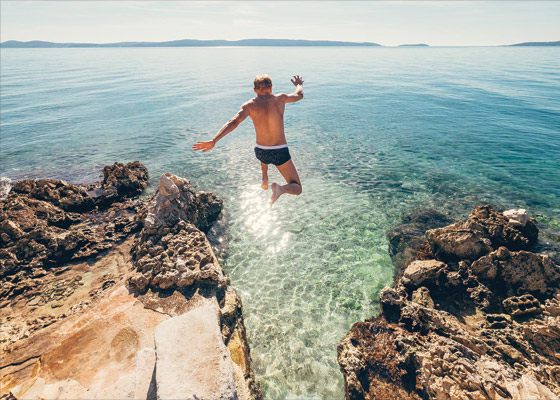 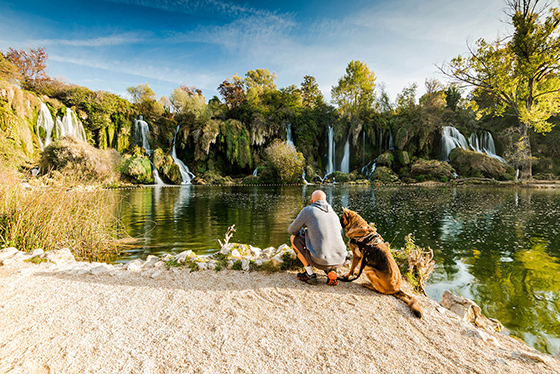